. . . that we had enough resolution a long time ago.

Photographers on the (now sadly defunct) Digital Wedding Forum were boasting of making and selling excellent 30x40 prints from four-megapixel cameras such as the Nikon D2H and the original Canon 1D in the early years of this century. When the Canon 1DMarkII came out with eight megapixels, I remember reading a post on the forum by celebrity wedding photographer Denis Reggie in which he crowed that it would no longer be necessary to turn the camera for verticals because with all that resolution verticals could simply be cropped out of horizontal frames!

For myself, I learned early on that huge amounts of resolution are unnecessary for most of our purposes. I made the switch to digital in 2003 with the six-megapixel Canon 10D and, like many, worked it into my wedding workflow over several months, finally doing my first all-digital wedding on June 28, 2003.

My first assignment after acquiring the 10D was a bridal portrait, for which I packed my usual equipment – a Pentax 6x7 loaded with Fuji NPH color negative film. Just for fun, I decided to take along the new 10D and do a few shots with it as well. I wound up shooting every pose with both cameras, and because I didn’t yet know about the advantages of RAW, I shot jpegs in the 10D.

(For those of you who came into photography after the big changeover to digital, I should mention that the 6x7cm -- [2¼ x 2¾ inches] -- was revered, along with its sister format 6x9cm, as giving the highest quality available in a readily hand-holdable camera. The 6x7 format made a negative or transparency seven or eight times as large as the APS-C [half-frame] sensor in my 10D.)

After looking at the files, I said to myself “Hummmh!” I selected a file and a 6x7 negative from similar poses and took them to my local, very good, professional lab and had a 16x20 print made from each. When the lab owner gave me the prints, he said “Hummmh!” Another commercial photographer friend, a Mamiya RZ67 (also 6x7cm format) shooter, walked in just then and when he saw the prints and was told what they were, he also said “Hummmh!”

Then he said “I was saving some money for a trip to Europe this summer, but maybe I need to look into this digital thing!”

To shorten the story, I showed the prints to a number of my commercial photographer friends and several art directors I worked with and asked them to tell me which was which. Only one could tell them apart, and that was because, as I later learned, the digital file had more depth of field.
The fact is that a group of experienced professional photographers and art directors couldn’t tell the difference between a 16x20 printed from a jpeg from a six-megapixel digital camera and one printed from a 6x7 film negative!

I've shown these photos before, but I'll show them again: This is a pair of pileated woodpeckers working on a tree in my backyard, taken with a Fuji X-T20 (with a 24 megapixel sensor about the same size as my old 10D) and the Fuji XC 50-230 lens -- by no means a premium lens. The camera was hand-held at 1/60th second with the lens wide open. 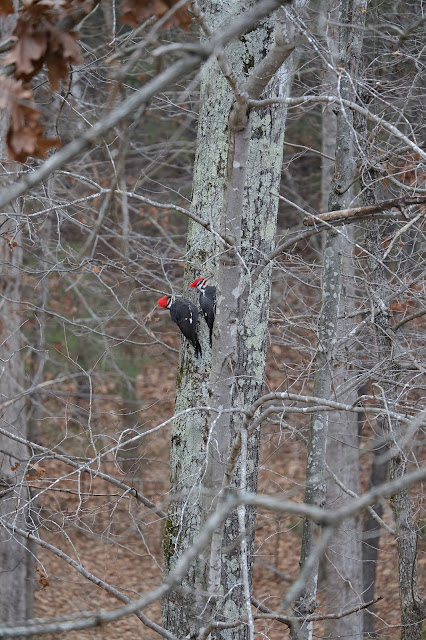 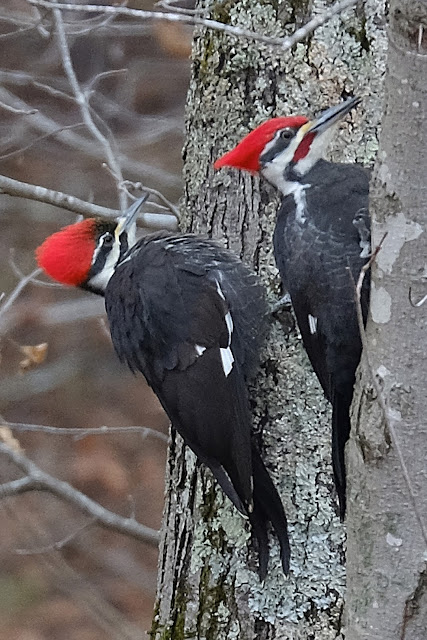 And now we have cameras offering 30--50--60 megapixels and beyond. How much image quality do we need, anyway? We have way more than enough to do just about anything we would ever want to do.

Photographers are like lemmings, eagerly lining up to pay out their money to take a dive over the more-resolution cliff. And then they come back and do it again next year.
Posted by Dave Jenkins at 6:00 AM