The Book that Changed My Life 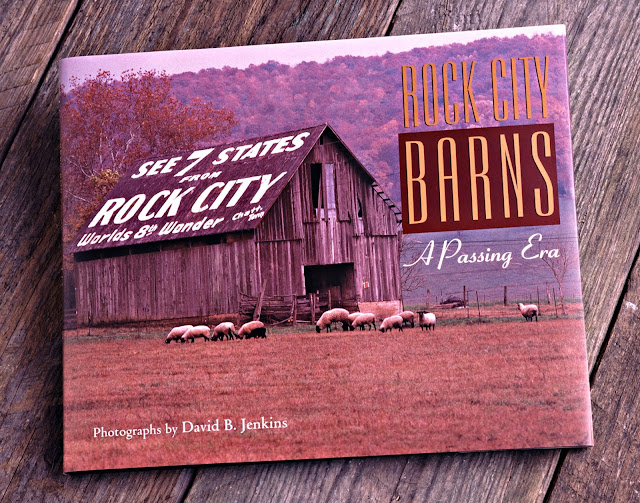 In 1982 I began doing advertising and public relations photography for Rock City Gardens, a tourist attraction on Lookout Mountain near Chattanooga, Tennessee. In 1988, Bill Chapin, the president of See Rock City, Inc. told me about his long-time dream to create a book about Rock City's barns and asked me to find out what it would cost.

He decided not to proceed at that time, but my interest had been kindled. I obtained a list of the 110 barns they were still repainting, and whenever my travels brought me near one, I made a photograph of it if possible. In 1994, after learning that the number of barns being repainted had dwindled to 85, I made prints of some of my photos and told him I felt that if we were ever to do a book, now was the time.

He didn't say much. Just looked at the pictures for several minutes, asked a few questions, then said the magic words: "Let's do it!"


In a few days he sent me a box containing hundreds of old office file cards from the 1960s; Rock City's only record of most barn locations. On each card was the name of the property owner at that time, the highway, and the distance from the nearest town. Many had a small photo attached, apparently taken about 1960; but some had only rough sketches of the barns. Inside the fold-over card was a record of rents paid (usually $3 to $5 per year) and repaint dates.  Rock City had had no contact with most of these barns since the late 60s.  The only way to find out if they were still standing was to go and see.

Sorting the cards into piles by states (15), and within states by highways, I planned an itinerary and began photographing at Sweetwater, Tennessee on October 24, 1994.  Over the next 18 months, stealing time from my studio whenever I could, the trail of barns led my old Chevy Blazer nearly 35,000 miles to more than 500 sites.

When the photography was well along, I hired a designer and began writing the text. The designer found a printing agent and boom! I was in the publishing business! The agent placed our book project with a printing house in Belgium known for fine printing -- their principal business was museum catalogs.

Chapin ordered 20,000 copies for Rock City, which gave me a tidy profit on the enterprise. And this is where I made what I have come to regard as a serious mistake: instead of taking my profit and using it to finance other book projects, I reasoned that I could triple my money if I used it to order 10,000 books to sell myself.

Unfortunately, I had failed to consider the true costs. I had to hire additional staff to deal with taking orders and shipping; I had to rent additional office space; and I wound up spending a great deal of time over the next ten years promoting and selling the book: time that could have been used to build up my photography business and, as I said, to develope new book projects. Instead, I spent many weekends lugging my books and prints to arts and crafts shows and spent many hours traveling thousands of miles to book signings.

As the old proverb says, "We grow too soon old and too late smart."

It was an interesting experience and kinda fun sometimes, but I do wish I had put the time into building up my business and developing new book projects.

Soli Gloria Deo
To the glory of God alone
Posted by Dave Jenkins at 6:00 AM