Eastern Europe 1990: An Interlude in Vienna


The tourist agency helped us find a reasonably-priced "pension" in a good, central-Vienna location. Checking in, we found the staff helpful and the room pleasant in an old European style. The Pension Andreas occupies the third floor of one of those massive, old, five or six-story buildings which seem to occupy most of Vienna's blocks, and is about a block and a half from the church where Beethoven is buried.


By this time it was about 8 p.m. and we were hungry, so we went looking for food. Supper for two at a nearby Chinese restaurant set us back about $34. Everything in Vienna costs three or four times what we were used to paying in Chattanooga. If I describe the cost of something in Vienna as "reasonable," remember that it's all relative.

Normally I'm a nightowl, but when you're traveling, especially on a working trip, you take your rest when you can get it. And we did get a very good night's sleep.
Monday, March 26  The next morning we had the "free" breakfast in the hotel's breakfast room -- the usual meat, cheese, jam, and so-so coffee. But a good deal compared with the price of breakfast on the town.


And then we were off for two days footloose in Vienna, like two kids let out of school! We had picked up maps and tourist brochures, but found it all very confusing, especially the transit system. Finally we took the plunge and bought passes and set off for the center of town. I carried cameras, of course, but Louise, exhausted from carrying the heavy S-VHS camera around Eastern Europe, left it in the room. 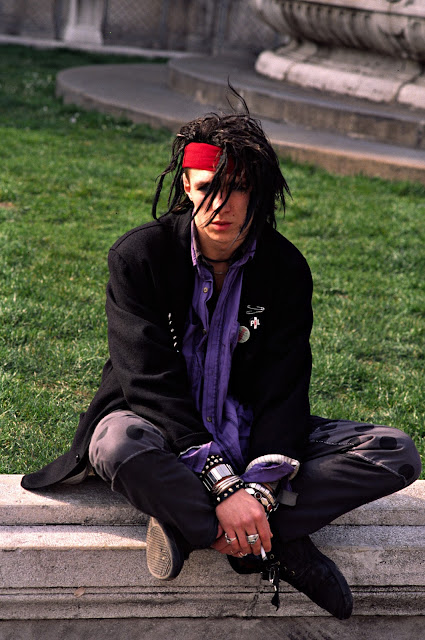 Louise took the opera house tour and enjoyed it very much, while I photographed the area around St. Stephan's Cathedral. Pizza and salad for lunch set us back $20. In the late afternoon we took subway and tram about 12 miles to the end of the line -- a town called Boden -- to see the Roman ruins. By this time it was nearly dark and too late to see the ruins if we had found them. We found instead a lovely park, a good supper of roast beef and potatoes, a friendly waitress, and more reasonable prices. It took us a little time to find the station, but we eventually got back to the pension, tired and satisfied.

Tuesday, March 27  The day dawned gray and gloomy and stayed that way. I spent some time trying to find out if any part of the Iron Curtain fence was still standing between Czechoslovakia and Austria  that I could photograph. I was informed that the fence was being taken down by the Czechs and no one knew for sure where to find the remaining sections. I would like to have had the photographs, but it looked likely to be a wild goose chase. So, we went out to see more of Vienna.

The weather put a damper on picture-taking, and Louise was tired from the previous day's walking, After a light lunch ($20 -- not much today, but this was 1990) I took her back for a nap and went out for a while by myself. The light was still bad.

Later, we took the tram to the McDonald's on the Franz Joseph Quay, then back to the Karntnerstrass, but the crowds had gone, and with them apparently, the street musicians. And it was starting to rain. So we went back to our room and began packing for our 7:10 a.m. flight.

Everything was fine until we came to security, where they flatly refused to hand-inspect my film. This was important, because airport x-rays can damage film. I stood my ground and asked to speak to the person in charge. They kept us waiting until 15 minutes before take-off, when a senior person showed up and passed us through without even looking at my film! That was life before digital cameras.

And then home, after 21 days of intensive, fascinating, enjoyable travel and work.

(Photographs made with Olympus OM and Leica M cameras and lenses, Fujichrome 100D and 400D films.)

Soli Deo Gloria
Posted by Dave Jenkins at 6:00 AM