Eastern Europe 1990: A Meeting in Moscow

After my return from the Arpatskaya we were met by Mrs. Ingrid Zaprometer, a lovely lady of about 70 who was a member of the secret group of Pentecostal Christians in Moscow. She took us by taxi to a high-rise apartment building somewhere out on the fringe of Moscow, where the elevator let us out at the 11th floor. Turning a corner or two and passing a young man working on a full-size Yamaha motorcycle in the narrow hall, we entered an apartment consisting of an entry hall, bathroom, small kitchen, and one room about 12 by 20 feet that was packed with about 70 people.

Some explanation is in order here, because this is now ancient history and some of my readers may never have heard of the Russian Underground Church.

During the 70 years the Communists ruled Russia, they conducted all-out war against religion, and most especially Christianity. The Russian Orthodox Church was the only church recognized by the government, and it was thoroughly infiltrated by the KGB, with even many of the priests being on the KGB payroll. There was at the time we were there only one Roman Catholic church and one Jewish synagogue in all of Moscow. All evangelical groups were illegal, with their members subject to discrimination and persecution. Many evangelical pastors and even lay believers were sent to prison camps in Siberia.


Our attendance at this meeting was probably only possible because of the "Glastnost" policies of loosened restrictions instituted by Prime Minister Gorbachov. Even so, the singing and preaching were in hushed voices to avoid attracting attention or alienating the neighbors. 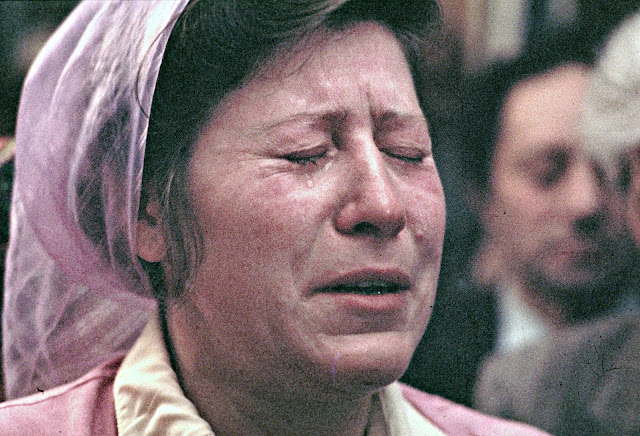 The service was long and the room was hot, but it was an unique experience and great privilege to photograph something few Americans had ever seen: the worship of the Underground Church. 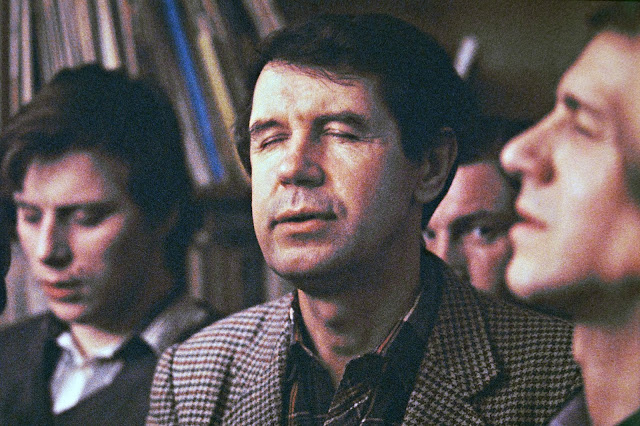 Afterwards, there was quite a long time of fellowship. I drank three cups of tea and most of a plate of wafer cookies before we finally caught a bus and then a subway, arriving back at our hotel around midnight.

The next day, Thursday, March 22, was chilly with a heavy overcast all day -- more like I had expected Moscow to be, actually. Louise went shopping with Olga Zaprometer, Ingrid's daughter. I went over to photograph the U.S. Embassy and some other scenes, then back to the hotel to check out. We then went to the Zaprometer's apartment with our luggage, where we were served an elegant high tea.

Dr. Zaprometer, 71, is a noted biochemist and teacher. He is also a believer, but in secret, for fear of losing his position at the university. The Zaprometers are people of high culture. Their apartment, for which they waited 15 years, is small by American standards, but beautifully decorated, with bookshelves containing an eclectic library of books in many languages as well as many art and music books lining the walls.


After the tea, Louise and I caught a taxi and went out to find and photograph the Roman Catholic church and the Jewish synagogue. Dr. Zaprometer had written the addresses for our driver, but it still took a good bit of looking to find them, even after we got to the proper section of the city.


We got back to the Zaprometer's about 5 p.m. They were amazed at our ability to catch taxis quickly. (The secret, of course, is to look like hard-currency American capitalists.)

After a very enjoyable supper with the Zaprometers, Paul Lauster, and the Russian pastor and his wife, I again exercised my taxi-catching ability, loaded in my ace travel companion (also known as my wife Louise), said goodbye to our friends, and headed off to the airport. Customs, security, and boarding were all uneventful and we were soon off to Poland on LOT, the Polish airline.

(Photographs made with Olympus OM and Leica M cameras and lenses, Fujichrome 100D and 400D films, except for the worship pictures. Blame the funky colors and large grain of those photos on 3M 640T film pushed one stop to ISO 1280 to make pictures under the low ambient light in the apartment. Today's digital cameras can do this easily, but that was then and we used what we had.)
Posted by Dave Jenkins at 6:00 AM