A Man of Vision 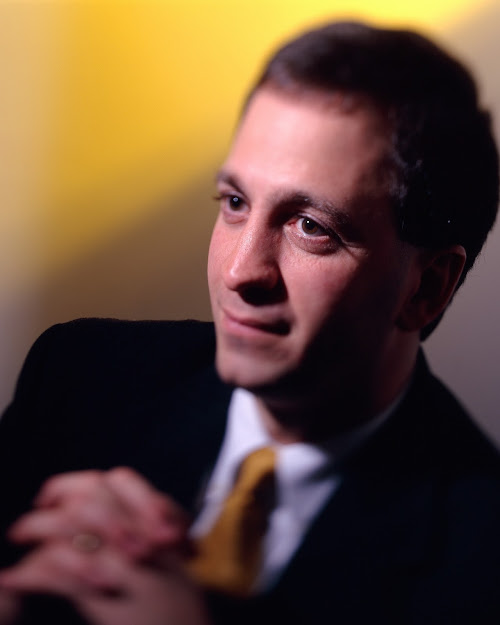 Founder/CEO of a High-Tech Recruitment Company

The concept for this portrait was the brainchild of Michael Largent, long-time friend and frequent client. (He says we've done more than 50 projects together. I wasn't counting.) When I first met him he was a gung-ho young newspaper photographer.

Michael has had a long and distinguished career as a graphic designer, creative director, owner of his own design agency, and now, professor of graphic design at a college. At the time of this particular project he was the Director of Marketing for a recruitment firm (headhunters, in other words) that specialized in staffing for the IT, engineering, and telecommunications fields. The purpose of the portrait was to portray the founder/CEO of the company as a man of vision.

The camera used was my Calumet-Cambo 4x5 view camera with a 210mm f5.6 Rodenstock lens, chosen because the movable front standard of a view camera allowed me to control the depth of field. For those who aren't familiar with this type of camera, I'll explain: 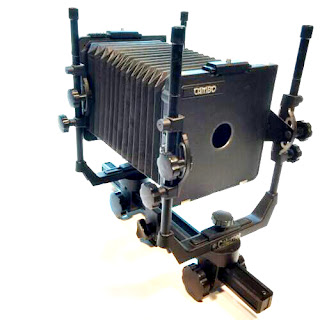 The subject was placed several feet from a gray wall. A fairly contrasty main light was set to the subject's right, and behind him and aimed to slant along the wall was a second light partially covered with a yellow gel. The subject was wearing a yellow tie specially chosen by Michael to fit the color scheme.

I  took readings with a Minolta incident light meter, then focused, put a Polaroid film holder on the camera, and made a few Polaroid test prints to make sure we were in the ball park. When the final Polaroid looked good, I exposed one sheet of 4x5 Fujichrome 100 color transparency film. That piece of film in its holder was marked and set aside. It would be processed first and evaluated, then all the other film we shot would be processed in one batch, with the processing time adjusted as needed if the test sheet indicated over or under exposure. That was the way we did it in those days. Cumbersome? Yeah, but we didn't have any better way to do it, and actually, got quiet good at it.

When the CEO got up from the posing stool he took off the yellow tie and gave it to Michael. "I hate this tie," he said. Michael still wears it sometimes.

To the glory of God alone