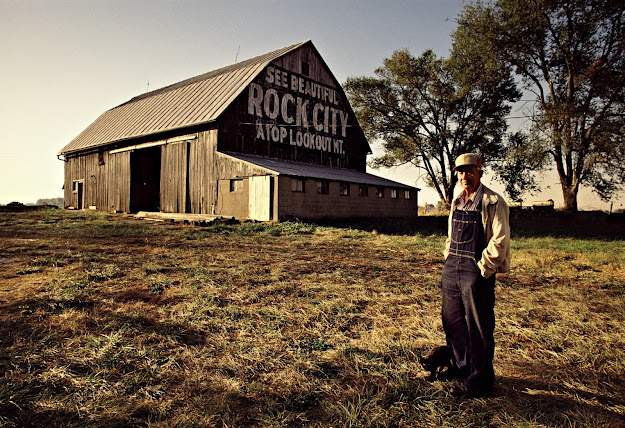 In the days before the interstates, U.S. Highway 41 was a major route from Chicago to Florida. And since it passed through Chattanooga, it was lined from one end to the other with barns emblazoned with the "See Rock City" sign. (For some reason there were never any Rock City barns in Florida. Perhaps there was no room for them between the Burma Shave signs.) South of Chattanooga, the "See Rock City" signs were positioned so that people returning north would be tempted to visit the attraction if  they had missed it on their way south.

When I began searching for barns along U.S. 41 in Indiana, I went all the way north to Hobart, just south of Chicago, where there had once been a Rock City barn. It was gone, and so were the many others that had once lined the route. Only one was left: on Clarence Spindler's farm in Gibson County, 18 miles north of Evansville.

In the early 1920s, when Clarence was born on his father's farm, U.S. 41 was a dirt track snaking through the countryside. The barn, built before Clarence was born, became a Rock City landmark in 1949, just two years after he brought his new wife home to the old farmhouse.

It was early on an October morning in 1995 when I pulled up to his farmyard. Clarence and I had never met; in fact I was not even sure he was still living. All I had to go on was an old file card from the 1960s which had been used by the sign painters who traveled the countryside back then, painting "See Rock City" on every barn whose owner would permit it.

Several knocks having produced no answer, I went on around to the barn and began making photographs. Clarence himself arrived on the scene just then, and we shared a few minutes of introduction and pleasant reminiscing. He remembers Clark Byers, the sign painter very well, he tells me, and is glad to know that Clark is still living.

Clarence's wife has passed on, and he gave up farming a few years ago.  "Not much fun anymore" he says. Someone else tends the old place these days, and Highway 41 flows toward Florida on four smooth lanes of asphalt.  The "See Rock City" sign on the barn was last repainted in 1967.

I asked if he would mind being in my picture. He allowed that it would be all right and stood where I asked as I made his photograph. Then serendipity sent a kitten to wrap itself around Clarence's legs and look up at me with eyes gleaming in the morning light.

To the glory of God alone